The station is owned and run by the Trofimuk Institute of Petroleum and Geophysics, Siberian Branch of the Russian Academy of Sciences in cooperation with the Alfred Wegener Institute, Helmholtz Centre for Polar and Marine Research from Germany.

The research facility is located at the southern coast of Samoylov Island in the southern part of the Lena River Delta, Northeast Siberia, close to the Laptev Sea.

The Russian-German research station was established in 2006 using old wooden station that was originally built as a logistics base for the Lena Delta Reserve. In 2013 a large modern station was built.

The station conducts a lot of research on the long-term permafrost processes in the Siberian Arctic in the fields of climatology, geomorphology and hydrobiology. 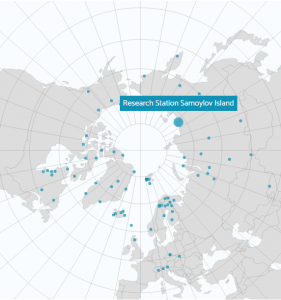