A Cross-cutting relationship is the principle in geology concerning crossing layers.

This means that if a dike cuts through a column of sediments, the dike must be younger. It is also possible to look at faults in this manner, to say when the fault was active. 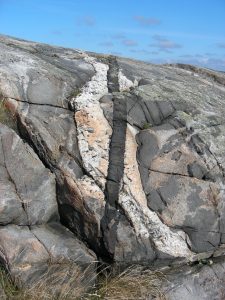 Related resources:
« Previous term: Corridor
Next term: Crustaceans »
Polarpedia has information categorized by main topics. Click on an icon below to view the available terms.