The following names are synonymous of a trip led by Shackleton in 1914-1917.

After Amundsen had reached the South Pole and Scott’s expedition ended tragically, an experienced Antarctic researcher, E. Shackleton, recognized that the only British destination worth exploring would be to traverse the entire continent of Antarctica – through the pole, naturally. The expedition was prepared for almost a year and was ready to set off in August 1914. Despite the outbreak of World War I, at the behest of First Lord Admiralty Winston Churchill, the expedition ships set off south.

The expedition had two ships prepared for cruising through the ice. The “polar” group of Shackleton sailed on ENDURANCE, commanded by Shackleton’s companion from previous trips, Captain F.Worsley. He was supposed to reach the Weddel Sea and leave a team on the shore; the team’s goal was to traverse the continent. The second ship – AURORA – commanded by J. Stenhouse, had to cruise to the Ross barrier and prepare food warehouses along the route which the Shackleton group was to follow after reaching the pole. 56 participants of the expedition were chosen by Shackleton and Worsley from over five thousand volunteers who responded to the press advertisement about the expedition.

ENDURANCE arrived in South Georgia, where the British whaling stations operated, in November 1914 and after almost a month of waiting for the improvement of ice conditions, she set out on the Weddel Sea. On January 18, when the ship was only 80 miles from the Bay of Vehsel, where it was planned to set up a land base, ENDURANCE was immobilized in an ice pack and moved along with parallel to the face of the Ronne shelf glacier to the west and northwest. The ship drifted for 10 months, and was crushed by ice , sank on November 21, 1915. The crew savesd equipment, boats and food. They built a camp on a thick ice field, then drifted for the next six months, not approaching the Antarctic Peninsula. The ice field broke at the edge of the ice pack range – the crew moved to the lifeboats and tried to get to the nearest mainland. After 8 days of paddling, they landed on the island of Côte d’Ivoire. They survived, but the island was situated beyond the routes of whaling ships, so the chances of a ship appearing were small, and the next winter is was approaching. Shackleton decided to sail for help to South Georgia. It is 800 nautical miles (almost 1,200 km) in the unusually turbulent waters of the Antarctic Ocean, but in accordance with the direction of the current around Antarctica and the prevailing wind directions. He took a 7-meter JAMES CAIRD launchboat, reinforced and partially protected from waves, along with 5 participants of the expedition. The rest had to wait for rescue on the island. They built a shelter from the other two boats and prepared for wintering. After nearly four weeks in extremely difficult conditions, a cruise began to reach South Georgia, but the storm forced the crew to land on the southern coast of the island. To reach the whaling site, they had to cross the island, crossing unknown, high, glacial mountain chains. Shackleton left the three weakest crew members in a safe haven and set off on another dramatic journey with two companions. In favorable weather and full moon, after 36 – hour walk they reached the Stromness whaling settlement. Immediately, the whaling boat took three people left from the south coast. Shackleton organized the next expeditions of the remaining 23 participants of the expedition left on the Island of Côte d’Ivoire. With very difficult ice conditions – next winter approaching –  three cruises of ships did not reach the island. The ice fields are far enough away that they couldn’t even inform people in Ivory Island that Shackleton’s mission was successful and help was close. Only the next cruise with Chilean tugboat ended with success – the entire crew was taken from the island and returned to civilization. The expedition participants were greeted enthusiastically in South America, the welcome in England was much less enthusiastic – Europe was in a war and Britain had more trouble than welcoming live heroes.

The history of AURORA was equally dramatic. The ship sailed to the island of Rossa, a land base was established, equipment and supplies were brought ashore. The land crew set up planned food stores for Shackleton, not knowing that he would not take advantage of them. During these activities, one of the participants died of exhaustion. Meanwhile, a violent storm removed the ice field from the land in which AURORA was frozen. The ship drifted in ice for eight months, but it did not get squashed and after getting free from the ice captivity, it went to Australia and then, during the next summer, went again to the Ross Sea, from which 7 participants from the land group were taken. Two were killed trying to cross the poorly frozen bay to the other part of the land base.

All in all, the Shackleton team returned ‘complete’, of the 28 people of the Aurora crew 25 survived.

Although the expedition has not achieved the intended goal, saving almost all participants of the expedition in such dramatic circumstances, is considered to be a huge organizational success and the great merit of Shackleton as commander. His example as a leader is currently presented during manager trainings. 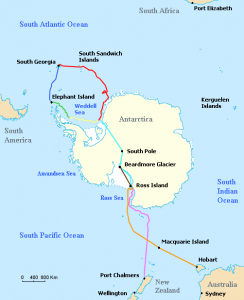 1914-1917: Map of the Endurance, Aurora, James Caird shipping routes, planned route of the continent and the Ross Sea group road to set up the Endurance Drift Food Storage on the ice. 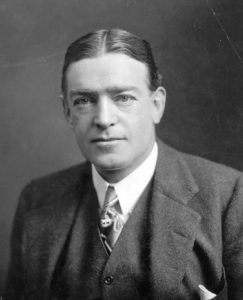