Palsas are low, often oval, ice-rich peat mounds that have a frozen peat and mineral soil core. They are usually between 0.5 to 10 metres high and from 2 up to 500 metres in length.

Palsas are found in areas with discontinuous permafrost, mostly in the circumpolar areas of the Northern Hemisphere: northern Canada and Alaska, Siberia, northern Fennoscandia and Iceland. They often occur in groups and grow on the active layer of permafrost.

For the formation of palsas’ ice “lens”, which is situated on the inside of the palsa, they need large quantities of water, and for this reason they occur particularly in bogs.

Usually there is a big amount of snow around them, but summits of palsas are free of snow even in the middle of winter, because the wind carries it off and deposits it on the slopes and elsewhere on the flat surface.

Palsas appear to go through a developmental cycle that eventually leads to thawing and collapse. Open cracks that commonly accompany palsa growth and the water that tends to accumulate around palsas contribute to this process. Structure of a Palsa, © University of Oulu 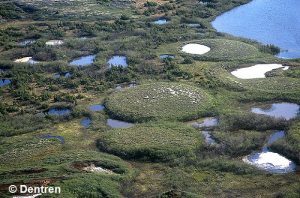 Related resources:
« Previous term: Pack ice
Next term: Parasitism »
Polarpedia has information categorized by main topics. Click on an icon below to view the available terms.