These opalescent clouds appearing during winter at high latitudes, in the lower stratosphere, at altitudes between about 15 to 25 km (normally, stratosphere is cloud-free due to its extreme dryness). They are only found in the polar regions, where stratospheric temperatures fall below about -700C, cold enough to initiate their formation.

Called “Mother of Pearl” by Scandinavians due to their iridescent,colourful appearance, these clouds are composed of mixtures of naturally occurring water and nitric acid.

Their surfaces act as catalysts which convert more benign forms of man-made chlorine into active free radicals (for example ClO, chlorine monoxide). During the return of Spring sunlight these radicals destroy many ozone molecules in a series of chain reactions. Also, they remove nitrogen compounds that moderate the destructive impact of chlorine.

Scientists recently discovered that polar stratospheric clouds, long known to play an important role in Antarctic ozone destruction, are occurring with increasing frequency in the Arctic. In recent years, the atmosphere above the Arctic has been colder than usual, and polar stratospheric clouds have lasted into the spring. As a result, ozone levels have been decreasing. 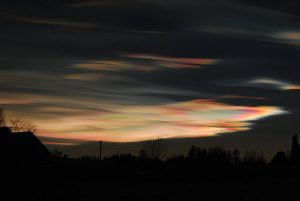 « Previous term: Polar orbit
Next term: Polar syndromes »
Polarpedia has information categorized by main topics. Click on an icon below to view the available terms.