It is known holding nearly still in our sky while the entire northern sky moves around it. That’s because it’s located nearly at the north celestial pole, the point around which the entire northern sky seemingly turns. Therefore it marks the way due north; the pole marks true north, which makes the North Star important in navigation, as the star’s elevation above the horizon closely matches the observer’s latitude. 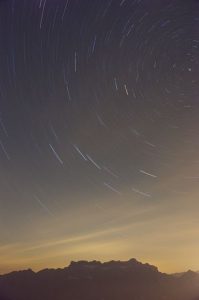