Located below the lithosphere, asthenosphere is a layer of mostly solid material (the molten regions of asthenosphere being found for example near the mid-ocean ridges and subduction zones).
It differs from the lithosphere in the way it responds to the applied force- it deforms plastically (which means that after removing the acting force, material is not restoring its original shape).

The movement of tectonic plates is caused by ‘floating’ of lithospheric plates on the asthenosphere, which – in geological timescale – is accomodating convective motion. 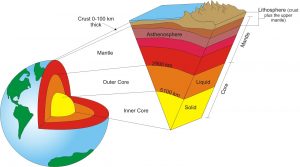 « Previous term: Arctic wolf
Next term: Astronomical polar night »
Polarpedia has information categorized by main topics. Click on an icon below to view the available terms.