Arctic wolf (polar wolf,white wolf – Canis lupus arctos) is a sub-species of the grey wolf – smaller, but heavier than its European cousin; the only sub-species of wolf that is not threatened. Arctic wolves mainly inhabit Northern Canada and Alaska, parts of Greenland, Iceland and Northern Europe.

Due to the extreme cold where the Arctic Wolf lives, it has white fur year-round which allows it to blend into their snowy surroundings. Arctic wolves have two thick layers of fur. The outer layer gets thicker as the winter months come along.

They first layer helps to form a waterproof barrier for the skin. Wolves are roaming singly or in packs. The packs are usually comprised of an adult male and adult female and their offspring. Pack sizes are usually 5 to 8 members. Arctic wolf is a carnivore. Its diet is based on the Arctic fox, caribou, muskoxen, Arctic hare, lemming and seals. Normally, only the alpha male and female Arctic wolves breed, however, in large packs others may mate as well. The mother gives birth to 2 or 3 grey-furred pups in late May to early June. For most of the year, the arctic wolf habitat is covered in thick ice. Tthe arctic wolves are unable to dig through the frozen ground to create dens. For this reason, they shelter in caves and outcrops and among trees. 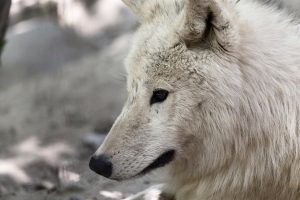 « Previous term: Arctic tundra
Next term: Asthenosphere »
Polarpedia has information categorized by main topics. Click on an icon below to view the available terms.