The original plan of Amundsen envisaged an expedition to the North Pole, but the news of its capture by F.Cook and Robert Peary caused plans to change. The expedition sailed on the FRAM ship (borrowed from Nansen) on August 9, 1910, and reached the Whale Bay on the eastern end of the Ross Ice Barrier on January 14, 1911. After the land base was built, food warehouses were located on subsequent latitudes 80o, 81o, 82o, 83oS. Sled dogs were used for transport, people moved on skis – they were experienced skiers. The polar group set off from the base on 19.10.1911. After reaching the Transantarian Mountains, after a few days of searching, they managed to find a way to the Antarctic Plateau through a A.Heiberg’s glacier. Amundsen reached the pole on December 14, 1911. For 4 days, the participants of the expedition conducted astronomical measurements to ensure that they indeed reached the pole. It took 32 days to return to the base. 30.01. 1912 FRAM departed to Tasmania, Amundsen informs about the success of his trip from Hobart.

The expedition planned on a grand scale had, first and foremost, scientific goals, the plan to capture the South Pole was the result of the appearance of a rival – Amundsen’s expedition (who in turn took the pole as a primary goal). The expedition was to set up a base in the well-known Scott Strait of McMurdo and use it on the route known from Shackleton’s expedition in 1909, the route to the Antarctic Plateau by the Breadmore Glacier. For transport, sleds pulled by ponies and the use of a motor sledge were planned. In the Antarctic Plateau, the sleighs were to be pulled by people, but the participants of the expedition had no experience in using skis and did not have confidence in them.

The activities leading to the establishment of the first food and fuel depots (at 79o and 80o) were marked by difficulties in maintaining the efficiency of ponies and motor sledges. As a result, the basic composition of the so-called ‘One ton storehouse’, planned for 80o S, was founded 40 km closer to the base. It had tragic consequences for the returning polar group. Further teams were to set up crews accompanying the polar group in the march south and returning to the base one after the other after completing their tasks. This caused additional delays on the way to the south. The polar group was on the Antarctic Plateau almost a month later than the Amundsen expedition. With a similar delay, Scott reached the Pole, where he found a tent with a Norwegian flag, left by Amundsen. The Scott group almost immediately went back, initially keeping the previous pace. However, it soon turned out that the food rations were calculated too strictly (the problem of loading the sleighs) and the participants of the expedition began to weaken as a result of malnutrition. It also reduced their resistance to cold. On February 17, during the descent of the Breadmore Glacier, one of the participants of the group died as a result of injuries caused by the fall. The rest with increasing difficulty move very slowly towards the base. On March 16, the second participant of the band committed suicide. On March 18, the remaining three set up a tent for the last time. Very bad weather conditions meant that they would not leave the tent anymore. On March 29, they died of hunger and exhaustion. One ton storehouse was 18 km away.

On March 26, a rescue group set off from the base, but very bad weather conditions forced it to return.

The TERRA NOVA expedition vessel departed to New Zealand taking 8 participants of the expedition. 13 people decide to winter over. In the spring – October 29 – a search group sets off, which on November 12 finds a tent of the last campsite of Scott and his companions. They were buried on the spot in an ice mound. The world learnt about the tragic ending of Scott’s expedition in 1913. 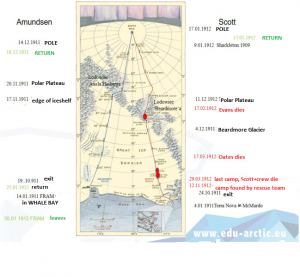 Map based on: What the Race to the South Pole Can Teach You About How to Achieve Your Goals.

« Previous term: Confusion effect
Next term: Continental shelf »
Polarpedia has information categorized by main topics. Click on an icon below to view the available terms.