The Depth Of Zero Annual Amplitude (ZAA) is the distance between the surface of the ground and the point below the surface where the ground is not affected by the temperature differences over a year.

In permafrost, the upper layer, known as the “active layer” is affected by melting and freezing throughout the year.  Underneath this layer, the temperature is always below 0°C and therefore the soil is permanently frozen. Going deeper, the annual variations in temperature become less and less significant and finally below a certain level the temperature remains constant throughout the entire year.

The point where the annual variation in temperature is less than 0.1°C is defined as the “Depth of Zero Annual Amplitude” (ZAA).

The depth of this point can vary between 10 and 20 metres below the surface, which depends on the climate conditions and soil. Underneath the ZAA, the temperature of the soil gradually increases as depth increases, due to the geothermic heat originating from below. Here, the temperature of the soil (being below 0°C throughout permafrost) is at 0°C again. This point therefore separates the frozen soil from the unfrozen soil and indicates the lower limit of permafrost. 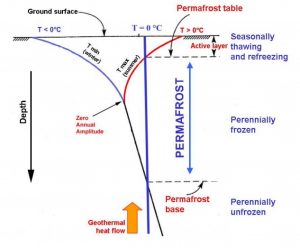 Related resources:
« Previous term: Delayed implantation
Next term: Diagenesis »
Polarpedia has information categorized by main topics. Click on an icon below to view the available terms.