« Previous term: Geologist and geomorphologist
Next term: Geyser »
Other languages:

Underground reservoirs of steam and hot water can be tapped to generate electricity or to heat and cool buildings directly. A geothermal heat pump system can take advantage of the constant temperature of the upper three meters of the Earth’s surface to heat a home in the winter, while extracting heat from the building and transferring it back to the relatively cooler ground in the summer. Geothermal water from deeper in the Earth can be used directly for heating homes and offices, or for growing plants in greenhouses.

There are three types of geothermal power plants:

Geothermal energy is generated in over 20 countries.  The United States is the world’s largest producer, and the largest geothermal development in the world is The Geysers north of San Francisco in California.

The National Power Company of Iceland currently operates 18 power stations all over Iceland, in five areas of operation making it one of the largest producers of renewable energy in Europe. 15 hydroelectric power stations, three geothermal power stations and two windmills. Iceland is a geothermal energy pioneer. Their unique geology, thanks to volcanism along a rift in the Eurasian tectonic plate and North American tectonic plate, provides a sustainable advantage: Heat from the ground. With this geothermal heat and innovative engineering, Iceland can provide hot water and electricity in their homes, warm their snowy streets, produce fresh local vegetables, and more. Around 25% of Iceland’s electricity comes from geothermal sources. Almost 100% of Iceland’s space heating and water heating is obtained from geothermal sources. 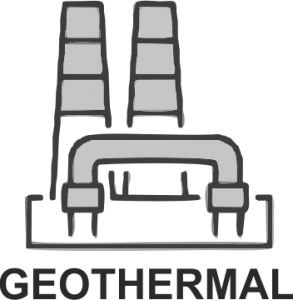 Related resources:
« Previous term: Geologist and geomorphologist
Next term: Geyser »
Polarpedia has information categorized by main topics. Click on an icon below to view the available terms.