Polar regions are areas where processes of changing the surface of the Earth are very vivid. Large temperature fluctuations, active glaciers and glacier-flowing rivers create new landforms; sea ice destroys the coast in one area but simultaneously expands it in others.
This activity causes polar areas to be the perfect terrestrial laboratory for researchers working on earth crusting and the processes that change it – that is, for geologists and geomorphologists. Although specialists in these two disciplines derive from different branches of earth sciences (geology is an independent branch of knowledge, and geomorphology is a part of geography), both research objects and methods interpenetrate.

Geologists survey older ground-compact rocks, glacial and aqua-glacial backdrops and primarily benefit from the ease of observation resulting from the lack of vegetation or its modest development. The living processes of glacial erosion and the formation of various forms of sediment accumulation on Spitsbergen have allowed, based on the generally accepted principles in earth sciences (the same processes, operating under the same conditions, have the same effect throughout the history of the Earth)to show that the landscape of Poland has glacial origin.  It also provided justification for the theory of multiple continental glaciation entering Poland. Polar areas in many places are not fully explored – for geologists and geomorphologists there are still opportunities for discovery, for those working in glaciated areas – a great opportunity to see live glacial processes and to work surrounded by untouched nature. 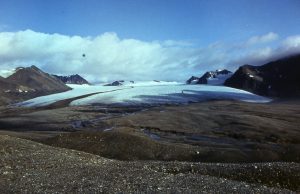