The Greenland shark (Somniosus microcephalus) is the most cold tolerant shark species in the world and the only one found regularly in the ocean north of Iceland. It is a member of the shark family called sleeper sharks because of their extremely slow swimming and lazy nature. This is a large long-lived demersal species that grows to at least 6.5 m (21 feet) and 1,000 kg (2,200 lbs). It eats almost anything that it can swallow and is a famous glutton. Various types of marine animals have been found in its stomach as well as cats, dogs, horses and reindeer. There is probably no need to fear the shark on land because these are probably carcasses that have drifted out into the ocean.

Historically, the Greenland shark was targetted for its liver which is very rich in valuable liver oil. Competition with less expensive whale oil and crude oil led to the collapse of the shark oil industry. Today the Greenland shark is mostly caught only as bycatch in other fisheries. 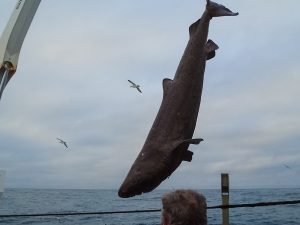 Related resources:
« Previous term: Greenland Institute of Natural Resources
Next term: Greenlandic language »
Polarpedia has information categorized by main topics. Click on an icon below to view the available terms.