the ionosphere is a part of upper atmosphere, extending from around 80 to 1000 km above the Earth’s surface, which is partially ionized.

Radiation (solar or cosmic) with wavelengths shorter than UV has enough energy to separate an electron from a neutral atom or molecule, which then becomes an ion.

Due to lower density of the upper atmosphere such free electrons can exist for a short period of time before they collide with ions recombining into neutral atoms. Any change in solar and cosmic radiation affects properties of the ionosphere, thus influencing f.e. radio waves propagation used for communication and navigation. 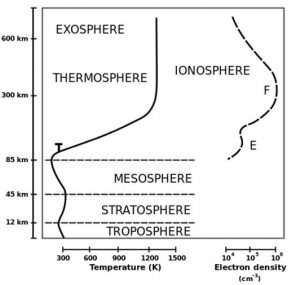 Related resources:
« Previous term: Invertebrate
Next term: Isohypse »
Polarpedia has information categorized by main topics. Click on an icon below to view the available terms.