Light pillars look like columns of light beaming to the sky, or appear to extend from the sky to the ground. It is an optical phenomenon produced when natural or artificial light is refracted by ice crystals.

The light source can be anything from the sun (called “solar” or “sun” pillars), to the moon (referred to as “lunar” or “moon” pillars), to streetlights. Light pillars can be seen at any time of the day.

The appearance of light pillars appearing below the farthest northern latitudes is so rare that they have been reported as UFO  in the past. 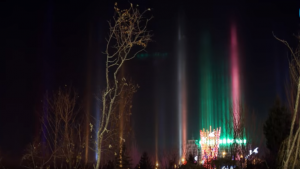 « Previous term: Life cycle of freshwater mussles
Next term: Lion’s mane jellyfish »
Polarpedia has information categorized by main topics. Click on an icon below to view the available terms.