Ny-Ålesund is a scientific settlement located in the Kongsfjorden (King’s Bay) fjord, in the Oskar II Land, in the northern part of Spitsbergen. It is inhabited all-year. In summer, during main scientific observations season, some 130 people live here, mainly Arctic researchers. During winter only about 30 people remain,who conduct winter research and the maintenance of the town and its infrastructure.

Ny-Ålesund was founded by the Norwegian King’s Bay Coal Company in 1916, as a coal mining town. In this time almost all coal in the world was consumed by empires engaged in the First World War. Therefore for neutral Norway even such a remote outpost was a profitable enterprise. 200 people inhabited the town in the years of mining operations. Hospital, school, hotels and restaurant were present. In 1962 a tragic accident killed 21 miners. After that the Norwegian government decided to close down mining activity in Ny-Ålesund.

Already in 1964 Ny-Ålesund began to serve scientific purposes, as a German geophysicist spent a winter there. In the 1970´s a satellite data receiving station was installed and since 1989, when regular air connection with Longyearbyen was established, international scientific stations have been built. King’s Bay Coal Company, the operator of the settlement, has adapted some of the houses used previously by miners and fishermen for the new inhabitants as well as for museums maintaining some of the old culture and atmosphere. New and modern buildings have also been built.

Currently Ny-Ålesund houses 17 scientific facilities, belonging to 10 different countries. Most of them focus their research on Earth sciences, biology or astronomy. Additionally, individual scientists who conduct projects related to the Arctic environment travel there for short time periods for measurements.

Ny-Ålesund is the northernmost permanently inhabited civilian settlement in the world. 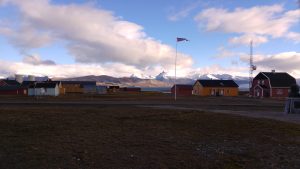 Related resources:
« Previous term: Nutrients
Next term: Obliquity »
Polarpedia has information categorized by main topics. Click on an icon below to view the available terms.