Siberia is a territory belonging to Russia in northern Asia. In the west it stretches over 7,000 km from the Ural Mountains to the ridges of the Pacific Ocean water divide in the east and 3,500 km from the Arctic Ocean coast in the north to the Central Asia borders in the south. Its area is about 10 million km2 (without the Russian Far East, which is not always classified as a part of Siberia).

Traditionally in Russia the whole territory of Siberia is divided into Western Siberia, which includes the West Siberian Plain, the Altai Mountains, Kuznetskiy Alatau, and Eastern Siberia, which includes the Central Siberian Plateau and the surrounding mountains in the east and south, Taymyr Peninsula and the lowlands on the coast of the Arctic Ocean to the east of Yenisey.

According to the Russian Census of 2010, the territory of the Siberian and the Far Eastern Federal District is inhabited by 25,6 million people, which is 17,9% of the total population of Russia.

The number of indigenous Siberian people in the same census was estimated at 1,6 million (1,1% of the total population). 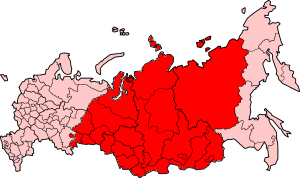 Related resources:
« Previous term: Shrimp
Next term: Siberian people »
Polarpedia has information categorized by main topics. Click on an icon below to view the available terms.