Solar energy is radiant light and heat from the Sun that is harnessed using a range of ever-evolving technologies such as solar heating, photovoltaics, solar thermal energy, solar architecture, molten salt power plants and artificial photosynthesis. Active solar techniques include the use of photovoltaic systems, concentrated solar power and solar water heating to harness the energy. Passive solar techniques include orienting a building to the Sun, selecting materials with favorable thermal mass or light-dispersing properties, and designing spaces that naturally circulate air.

The Earth receives 174 PW of incoming solar radiation (insolation) at the upper atmosphere. Approximately 30% is reflected back to space while the rest is absorbed by clouds, oceans and land masses. Most of the world’s population live in areas with insolation levels of 150–300 watts/m², or 3.5–7.0 kWh/m² per day.

Solar energy is an important source of sustainable and renewable energy and its technologies are broadly characterized as either passive solar or active solar depending on how they capture and distribute solar energy or convert it into solar power.

Solar and wind energy are growing rapidly, but while the energy is renewable every solar panel and wind turbine is largely made from non-renewable resources. These energy technologies also have a limited lifespan and the power plants we build today will need replacing in the future. 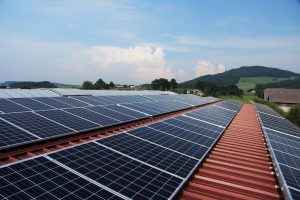 Related resources:
« Previous term: Sill
Next term: Stratigraphy »
Polarpedia has information categorized by main topics. Click on an icon below to view the available terms.