Arctic skua (Stercorarius parasiticus), also known as parasitic jaeger, is a large seabird about the size of a common gull. It has a contrast-rich plumage with dark cap, white neck and belly and dark back and upper wings.

This species breeds on the northernmost coasts of Eurasia and North America. It is a transequatorial migrant, wintering on the southern tips of South America (as far north as Peru and Argentina), Africa (as far north as South Africa and Angola), and on the coasts of Australia and New Zealand. Arctic skuas live most of their lives at sea, and come ashore only to breed in the Arctic summer. Once young jaegers leave the nest, they may not visit land for two years—until they have themselves reached breeding age.

These seabirds are sometimes referred to as avian pirates as skuas steal a lot of their food from terns, puffins and other seabirds that are carrying fish back to their nests and young. (so called kleptoparasitism” means that they are feared by the other seabirds. They will also target human intruders if they are near their nests and can hit them with their powerful feet. Its diet includes eggs and small birds, but skuas also feed on small mammals and fish. The word ‘skua’ comes from Old Norse and mean a seagull. 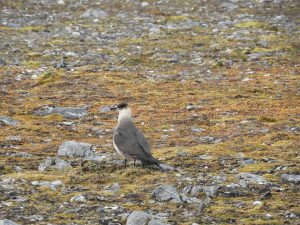 « Previous term: Arctic haze
Next term: Arctic Station »
Polarpedia has information categorized by main topics. Click on an icon below to view the available terms.