Biomining is the process of using microorganisms (microbes) to extract metals, like copper from rock ores or mine waste. Biomining techniques may also be used to clean up sites that have been polluted with metals.

It is a very low capital, low operational cost, and a low energy input process. This technology is also environmentally friendly as it generates minimal amount of pollutants.

Using bacteria can result in extracting as much as 90% of the total metal at a pit mine, instead of merely 60% with traditional techniques.

Microorganisms (microbes, mostly bacteria) used for biomining are naturally present at mining sites. They normally use mainly oxygen and CO2, and use the mineral itself as a source of energy.

If a mining site is left alone, microorganisms would eventually liberate copper from rocks, but it could take hundreds of years.

To speed up the process in a biomining lab, scientists use bioleaching. 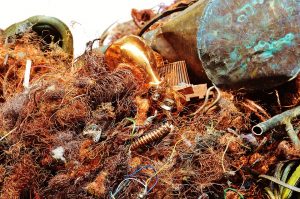 Related resources:
« Previous term: Biome
Next term: Biotic environment »
Polarpedia has information categorized by main topics. Click on an icon below to view the available terms.