The nomadic Siberian nation, which in Russia mainly live on the Chukchi Peninsula. With the Koryak people they belong to the Paleosiberian group. The native language is Chukchi. Chukchi people traditionally live off hunting and reindeer husbandry. According to the Russian Census of 2010, 15,908 people of this nationality live on the territory of the Russian Federation. 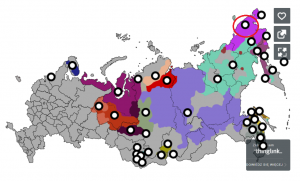 Area within the Russian Federation inhabited by Chukchi, source: http://engur.ru/map_ispn