« Previous term: Convergent Plate Boundary
Next term: Corona »
Other languages:
It was first described by the 19th-century French engineer-mathematician Gustave-Gaspard Coriolis in 1835.
The Earth rotates to the east at an effectively constant angular velocity, but different latitudes have different linear speeds. A point at the equator has to go farther in a day than a point mid latitudes, so it must go faster.
The general result is that something in the Northern Hemisphere moving along in one direction will be deflected to its own right with respect to an observer on the ground.
As air moves from high to low pressure in the northern hemisphere, it is deflected to the right by the Coriolis force. In the southern hemisphere, air moving from high to low pressure is deflected to the left by the Coriolis force.Similarly, it makes ocean currents – gyres–rotate clockwise in the northern hemisphere and counter-clockwise in the southern hemisphere.
The coriolis force is strong towards the pole and it is absent along the equator.

Where V is velocity, Ω is angular velocity and sinA is latitude.

That’s why at equator 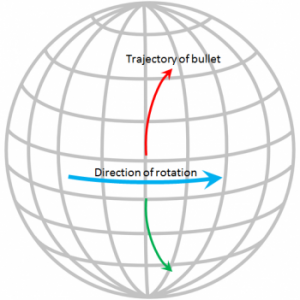