The Fibonacci sequence is an numerical pattern – a series of numbers where a number is found by adding up the two numbers before it. The sequence appears in many settings in mathematics and in other sciences.

Mathematicians have learned to use Fibonacci’s sequence to describe certain shapes that appear in nature. These shapes are called logarithmic spirals, and Nautilus shells are one example. You also see logarithmic spiral shapes in spiral galaxies, and in many plants such as sunflowers. Some plants branch in such a way that they always have a Fibonacci number of growing points. Flowers often have a Fibonacci number of petals, daisies can have 34, 55 or even as many as 89 petals. 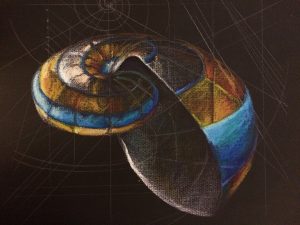 « Previous term: Fermi paradox
Next term: Firn »
Polarpedia has information categorized by main topics. Click on an icon below to view the available terms.