Fulmar (Fulmarus glacialis) has a gull-like appearance, but is closely related to albatrosses. These birds are easily identifiable by the prominent, tubular nostrils on top of their bills. Northern Fulmar breeds in the Aleutians and on coasts and islands of Alaska and Canadian Arctic. Spends winters at sea, in the Pacific Ocean south to California and the Baja Peninsula and in the Atlantic Ocean south to North Carolina; also found in northern Eurasia. The fulmar flies low over the sea on characteristic straight, stiff wings, with shallow wingbeats, gliding and banking to show its white underparts then grey upperparts.

Fulmars are pelagic (meaning they live entirely at sea) except for their breeding months. They will eat almost anything; their natural foods are small fish, squid and crustaceans; but they often take ships’ garbage (fish waste). nests in colonies on oceanic cliffs. They became very numerous in waters of the North Atlantic, possibly due to the increase in waste available from trawlers gutting fishes at sea . The Norse used to call them “foul ghouls” for their pungent-smelling stomach oil, but this evolutionary trait is both a defensive tactice and mid-flight energy source. Flmars will spit a fishy smelling oil at anything (or anyone) that gets too close to their nest. If fulmar oil gets on your clothes, the smell stays there, no matter how often you wash them.

Fulmars have incredibly large nares and very well developed olfactory centres (the part of the brain that deals with the sense of smell). hey can smell fish oils from up to 25 kilometres. 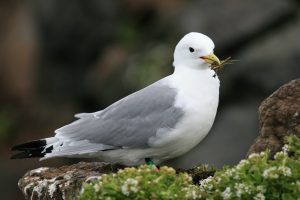 « Previous term: Frost smoke
Next term: Fungi – Mushroom »
Polarpedia has information categorized by main topics. Click on an icon below to view the available terms.