Greenland (in inuit: Kalaallit Nunaat ) s the world’s largest island, located in both western and northern hemispheres; and is divided by Arctic circle. It comprises of main land, surrounded by hundreds of smaller islands. In the middle there’s INLAND ICE, the second largest ice body in the world, after the Antarctic ice sheet (1,710,000 square kilometres , up to 3.2 km thick). Nunataks are a very characteristic element of this landscape.

Greenland has 3 types of climate: polar, Arctic and sub-Arctic, owing to the size of the country there are great variations in the weather from region to region. While part of the North American continent, Greenland is more culturally associated with Europe. In 2018, Greenland has an estimated population of 56,565, which ranks 192nd in the world.

Today, about 80 percent of Greenland’s population is of Inuit or mixed Inuit/Danish heritage. Most of the remainder are of Danish descent, although a small number trace their heritage back to other regions of Europe.

With sea eagles, seals, whales, musk oxen and polar bears, Greenland’s wildlife is rich and extremely diverse. Scientists are not able to estmate number of nanoqs (polar bears in inuit) in Greenland, Greenlanders can only hunt no more than 150 polar bears each year. The government also gave permission to hunt polar bears for recreational purposes. Polar bear meat is a part of Greenlandic cuisine.

As for flora, there are no trees growing naturally, only artificially planted like pine from Norway. NIVIARSIAQ (dwarf rosebay willowherb) is a national flower of Greenland ( NIVIARSIAQ means little girl and is also a popular name).

Politically, Greenland is a “constituent country” of Kingdom of Denmark. It has lots of independence, but the head of the country is queen Margaret II Greenland has an extensive type of self-government, separate emblem, flag and anthem. 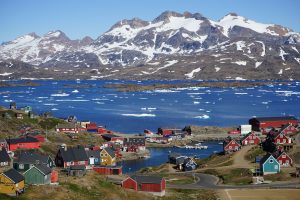 Related resources:
« Previous term: Greenhouse gas
Next term: Greenland Institute of Natural Resources »
Polarpedia has information categorized by main topics. Click on an icon below to view the available terms.