Polar bear (Ursus maritimus) lives in the Arctic beyond the Arctic Circle in Canada, Alaska, Greenland, Russia, and in the areas covered by sea ice around the North Pole. It does not hibernate during winter, and stays in areas with sea ice, which helps him to move from one place to another and hunting for seals, mainly ringed and bearded. During the summer, when areas of the Arctic ice are shrinking, stays in the coastal zone. Males can weigh up to 700 kg, females are an a half lighter, and weigh up to 350 kg.

After the mating season in April and May, the cubs are born in a snow den in December and January. In the spring they leave the shelter, and stay with their mother for approx. 2 years.

It includes, among others, mainly carnivorous polar bear, herbivorous giant panda and the brown bear, which eats meat as well as plant food. Evolutionary lineages of a polar and brown bears separated 5000,000 years ago, when the climate started to cool again, and the population of brown bears remain in areas further north.

Ways of adaptation to Arctic climate

Arctic climate with long and cold winters and the phenomenon of the polar night forced polar bears to evolve special features that help them to survive. Great sense of smell and long neck with narrow head make them easier to hunt for seals hidden under the ice. Wide paws covered with fur and claws curved in a special way help them not to sink in the snow, or slip on the ice. Fat reserves help them when fasting for several months due to not enough food, and the lack of sea ice that prevents from seal hunting.

Pollution, hunting, human economic activities (eg. oil exploration), as well as the progressive melting of sea ice in the Arctic are real threats to polar bears. In 1973 Canada, Denmark, Norway, the Soviet Union and the United States signed the International Agreement on the Conservation of Polar Bears.

Currently, many activities are carried out to protect this species.

Scientists working at the Norwegian Polar Institute with the activists of WWF organization track polar bears in the region of Svalbard archipelago. They use special GSP tracking collars, which are attached to animals necks.

Also Polish scientists working at the Polish Polar Station Hornsund on Spitsbergen every year make statistics of visits of polar bears in the vicinity of the station. 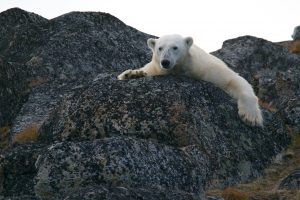 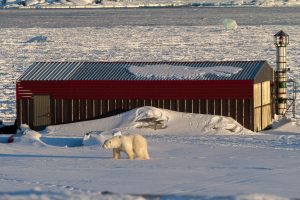 « Previous term: Polar air
Next term: Polar explorer »
Polarpedia has information categorized by main topics. Click on an icon below to view the available terms.