Muskox (Ovibos moschatus), also spelled musk-ox, is a huge hoofed Arctic mammal. Musk Oxen are herbivores and graze on grasses, reeds, sedges and other ground plants, digging through snow in the winter to reach their food. One of their favourite foods is polar willow.

Their name is derived from the strong musky smell of the bulls that is omitted during the mating season in summer. The musky smell is used to attract females during breeding. As for breeding habits, prolonged courtship begins in late July as bulls assess the females’ reproductive state. In August, courtship with increasing contact leads to successful mating. Females produce a single calf the following year in April – June.

Previously they werewidespread across the Arctic but then wiped out in many places by over-hunting. They can be found on the treeless tundra from Alaska east through northern Canada to Greenland. There are also several introduced populations, which are now well established in West Greenland and Qaannaaq. The species was re-introduced to Alaska (USA), and four locations in West Greenland (Denmark). Muskoxen were also introduced to Norway and Svalbard (Norway), although on Svalbard, they have since died out. They are thought to have crossed the Bering Strait to Canada 90 000 years ago.

The Musk Oxen, along with Yaks of Central Asia, have the longest fur of any other animal. They have an insulated woolly undercoat and some of the hairs in the outer coat are almost 100 centimetres long. Their coats are thick, dark brown and hang almost to the ground. They have changed little since the ice age. They survive most severe temperatures in part due to their dense undercoat of woolly fur called Qiviut, which is said to have an insulation factor 10 times better that of wool. The outer hairs, called guard hairs, cover a second, shorter undercoat that provides additional insulation in winter. The undercoat falls out when temperatures climb at winter’s end.

Musk ox has a heavy bony plate across the forehead, and often lifts and drops its massive head to break the snow crust when it becomes too hard to paw through.

Musk oxen live in small families and extended groups in the summer of as few as 5 animals, in the winter they may join other animals and form groups of up to 60 individuals. Larger groups help to provide protection against predators and also from the weather by standing closer. 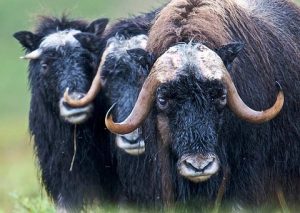 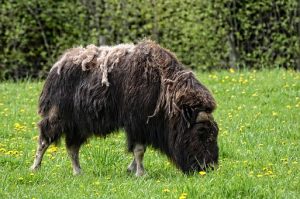 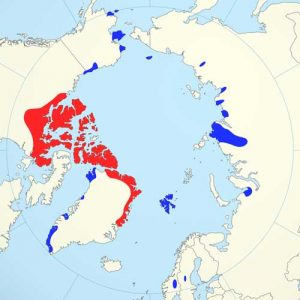 Related resources:
« Previous term: Mpemba effect
Next term: Mycorrhiza »
Polarpedia has information categorized by main topics. Click on an icon below to view the available terms.