Aristotle first noticed that hot water freezes faster than cold, but chemists have always struggled to explain the paradox.Possible explanations include: an effect from the evaporation of hot waterincreased convection in hot waterincreased tendency of cold water to supercool compared with hot waterpotential different amounts of dissolved gases in cold water compared with hot watereffect of frost formation – hot water tends to freeze from the bottom while cold water tends to freeze from the topthermal conductivity, causing the container of hot water to melt through insulating ice in the freezer, potentially exposing the container to a colder layer beneath the ice.

The effect is named after its discoverer – Erasto Mpemba, who as a teenager went to school in Tanzania in the 1960s. During cookery lessons, he was taught to make ice cream by heating milk and sugar together on a stove, then leave the mixture to cool before putting it in the freezer to set. Mpemba noticed something weird: when he put the hot mixture straight into the freezer it was ready faster than if it was left to cool down.

“If two systems are cooled, the water that starts hotter may freeze first”.Mpemba & Osborne (1969) 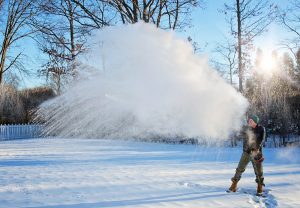 Related resources:
« Previous term: Moraine
Next term: Muskox »
Polarpedia has information categorized by main topics. Click on an icon below to view the available terms.