English meteorologist George Hadley created the scientific theory of the Hadley cell in 1735.The tropical regions receive more heat from solar radiation than they radiate back into space, and the polar regions radiate more than they receive; because both areas have nearly constant temperatures,

Hadley theorized that warm air must therefore rise near the Equator, flow poleward at high altitudes, and lose heat to the cold air present near the poles. Hadley cell is a large scale atmospheric circulation pattern in the tropics that produces winds called the tropical easterlies and the trade winds., caused by warm air rising in the tropics and flowing toward the poles and then cooling off, descending, and flowing back toward the equator.

The mechanism is following: The air separates and starts to move both north and south towards the poles. When it reaches about 30°N and 30°S, the air cools and sinks towards the ground forming the subtropical high-pressure zone. As the air sinks, it becomes warmer and drier. This creates an area of little cloud and low rainfall, therefore desert are present in the landscape.

As global temperatures rise, the temperature difference between the poles and the equator is likely to decrease, expanding the Hadley Cell. One effect this has is that mid-latitude regions like the Mediterranean and the Southwestern US are likely to see an increase in sea level pressure—which corresponds to drier weather. 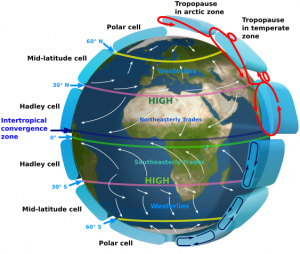 Related resources:
« Previous term: Haddock
Next term: Halibut »
Polarpedia has information categorized by main topics. Click on an icon below to view the available terms.