The humpback whale (Megaptera novaeangliae) is closely related to the other rorqual species of the genus Balaenoptera but is still different enough to have its own genus, Megaptera, meaning “giant wings”. This refers to the huge flippers near the head which are one of the main identification features.

The humpback whale is also much stockier than the other rorquals and has a characteristic warty nose. It can reach up to 17 m length and 40 t in weight, so it is shorter but heavier than the sei whale.

Humpback whales have a global distribution as do the other rorquals. The majority of them migrate to warmer waters, such as the Caribbean, in winter.

The stock recovery was slow for a long time, as might be expected for a large and slow growing animal. However, in recent years, their numbers have increased by as much as 12% each year. Humpbacks have once again become quite common in Icelandic waters, much to the pleasure of whale watchers. Their number is now estimated to be around 14,000 individuals, which is probably close to what it was before whaling began in Icelandic waters. 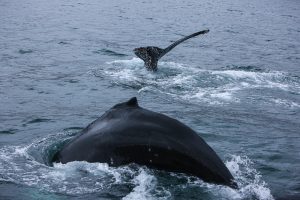 Related resources:
« Previous term: Horizontality
Next term: Hydrology »
Polarpedia has information categorized by main topics. Click on an icon below to view the available terms.