Igloo (iglu, aputiak, nuktitut syllabics: ᐃᒡᓗ, “house”) is a traditional shelter of Inuit people in Greenland and Arctic parts of North America. It’s a small, dome-shaped hut made of blocks of hard snow. When there is a source of heat inside the igloo the walls tend to melt and then refreeze to make a layer of ice on the walls and then reinforce the structure of the igloo and make it warmer inside. The air pockets in the snow act like isolation. The snow used for the igloos has to have structural strength to be able to be cut without breaking and then be easily stacked. The ice cubes are cut by a hand made knife; experienced Inuit would need only an hour to build one. An igloo traps body heat so the people inside act as a furnace by providing their own heat. Even with temperatures as low as minus 45 outside, there can be plus 10 inside. Also, igloos do not have flat bottoms.

The inside of the igloo is tiered, or terraced, the uppermost level being where the people sleep, the middle is where the fire is and the work takes place, and the bottom level actually is a “cold sump”. The principle is that all the coldest air from inside the igloo runs downward off the terraces and collects in the bottom, thus allowing the upper portions to stay warmer. Sometimes, a short tunnel is constructed at the entrance to reduce wind and heat loss when the door is opened. Traditionally there are three types of igloo, each one of a different size and used for different purposes:

Some Inuit people would make a hole through the ice inside of the dome to be able to ice fish inside their homes. 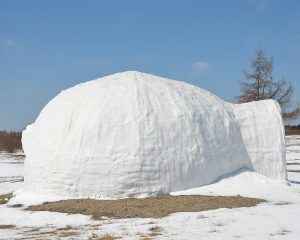