Indigenous people are descendants of those who inhabited a country or a geographical region at the time when people of different cultures or ethnic origins arrived. The new arrivals later became dominant through conquest, occupation, settlement or other means.

At least 370 million people living in 90 countries across the world are considered to be indigenous.

Arctic indigenous people are about 10% of total population in the area (c.a. 400 000 people) There are over 40 different ethnic groups, including: Saami in circumpolar areas of Finland, Sweden, Norway and Northwest Russia, Nenets, Khanty, Evenk and Chukchi in Russia, Aleut, Yupik and Inuit (Iñupiat) in Alaska, Inuit (Inuvialuit) in Canada and Inuit (Kalaallit) in Greenland. 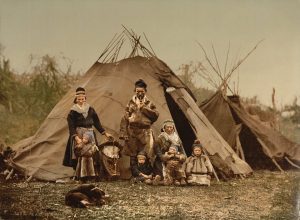