The Sami revolt in Guovdageaidnu, also known as Kautokeino rebellion/revolt/uprising, took place on Monday November 8th, 1852, when members of the parish attacked the village, set houses on fire and murdered the merchant and the bailiff. The rebels were seized by other Sami.

The Kautokeino uprising is the only example of religiously motivated revolt withing Laesthedianism.
During this time, the Sami were poorer than the Norwegian settlers in the north, and they were considered socially inferior to the Norwegians. The local merchant, who sold the local Sami liquor, was a target for the rebellion due to his repeated cheating and exploitation of Sami customers, many of whom were vulnerable alcoholics.
The rebels consisted of one group of approximately 35 Sami who had joined forces to become a large siida, led by Mons Somby (27 years old) and Aslak Hætta (28 years old). Together with Ellen Skum (25), Lars Hætta (18), and Henrik Skum (20), they were sentenced to death in the trial following the event, but the latter 3 were later pardoned and received life sentences of hard labor alongside 8 other people (4 men and 4 women). Two of the leaders, Mons Somby and Aslak Hætta, were later beheaded by the Norwegian government.Another 15 people were sentenced to jail for varying lengths from a few days up to 12 years. Three people died before or during the trial and 4 were acquitted.

The Sami very rarely resorted to physical violence in their relations with the national authority
Some historians have theorized that a few of the rebels of the Kautokeino Rebellion were mentally ill, and that was the reasoning for the violence. Other historians claim that the violence was a result of a misled religious interpretation of the teachings of Laestadius. Their interpretation of Laestadianism led the rebels to believe that they needed to “exorcise” the evil of alcoholism completely from their community. 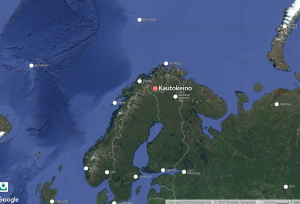 « Previous term: Karst spring
Next term: Keystone species »
Polarpedia has information categorized by main topics. Click on an icon below to view the available terms.