The United States Air Force was engaged in the only known hostile geoengineering – militarization of meteorology. U.S. flied more than 2,600 cloud-seeding sorties over North and South Vietnam, Laos, and Cambodia as part of a covert effort to extend the monsoon season and inhibit North Vietnamese troop movements. The operation seeded clouds with both silver iodide and lead iodide, resulting in the targeted areas seeing an extension of the monsoon period an average of 30 to 45 days.

It wasn’t the first time weather was percieived as potential weapon. In 1872 the US Congress authorised the Secretaries of War and the Navy to test the relationship between artillery fire and rain propagation proposed by Edward Powers in his War and the weather book (1871). After the operation Popeye was declassified in 1974, the United Nations banned the weaponization of weather after the passage of the Environmental Modification (ENMOD) Treaty in 1977, which prohibited offensive weather modification from occurring over a large area. Operation Popeye was rather successful and reached its goals.

‘In our view, the experiments were undeniably successful, indicating that, at least under weather and terrain conditions such as those involved, the U.S. Government has realized a capability of significant weather modification. If anything, the tests were “too successful”—neither the volume of induced rainfall nor the extent of area affected can be precisely predicted. The only absolute control, therefore, is after the fact, i.e., to halt cloud-seeding missions”. 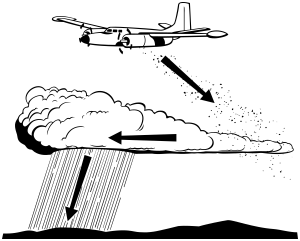