The Arctic sea ice minimum marks the day, each year, when the sea ice extent is at its lowest.

The sea ice minimum occurs at the end of the summer melting season. Arctic sea ice reaches its minimum each September. September Arctic sea ice is now declining at a rate of 13.3 percent per decade, relative to the 1981 to 2010 average.  According to the National Snow and Ice Data Center, the summer sea ice minimum extent has dropped to its smallest size in recorded history.

It’s now below 3.41 million square kilometers. The more the ice melts, the more ocean surface is exposed to absorbing heat from solar radiation. This warms the water and the region even further, causing positive feedback loop. 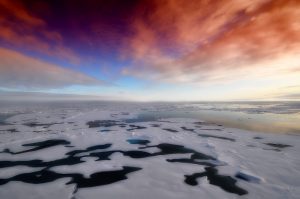