Symbiosis is close co-living between two different organisms that in most cases both benefit from being in the relationship. The biological definition does not require mutual benefits, but in everyday language, we typically use the term when both organisms gain from the other. The co-living can be life-long (called obligatory symbiosis), or it can be for periods only (called facultative symbiosis).

Photo:
This creative view of gut bacteria was made with the aim of challenging the idea that a sterile world is desirable, and instead note that a flourishing bacterial community in the gut is beautiful. These images represent the fusion of science and artistic techniques to communicate this concept of ecology. Created by Dr Nicola Fawcett and Christopher Wood, CC BY-SA 4.0 (https://creativecommons.org/licenses/by-sa/4.0), via Wikimedia Commons). 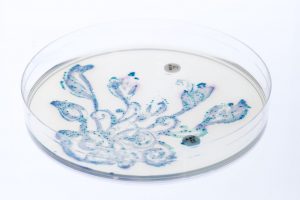 Related resources:
« Previous term: Svalbard Treaty
Next term: Talik »
Polarpedia has information categorized by main topics. Click on an icon below to view the available terms.