Despite near-zero temperatures, acidity, solar irradiation, and minimal nutritional value, over sixty species of algae appear in the snow. The most common species of snow alga is Chlamydomonas nivalis, which colors snow red or pink. This phenomenon is called “watermelon snow” or “blood snow”. “Watermelon snow” forms as the summer sun heats up and melts winter’s leftovers. It is said to smell slightly sweet, a bit like watermelon.

When these algae – typically green organisms – get a lot of sun, they produce a natural type of sunscreen (bright red carotenoids) that paints the slopes pink and red. The addition of color to the surface darkens the snow, allowing it to heat up faster, and melt more quickly. Algae changes snow’s albedo, causing decrease of 13% over the course of an Arctic melt season, compared with clean snow, meaning the dark snow would absorb much more light; it might cause a positive feedback loop (more snow melting, more algae blooms, darker surface, lowered albedo, higher temperature, more snow melting). 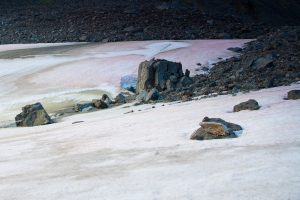 Related resources:
« Previous term: Water sky
Next term: Weather »
Polarpedia has information categorized by main topics. Click on an icon below to view the available terms.