Barentsburg is the second largest settlement in Svalbard. The first coal mining in the area of today’s Barentsburg (Grønfjord), located about 40 kilometres south-west from Longyearbyen, took place in 1912. To secure the equipment, the Norwegian company Kullkompaniet Isefjord Spitsbergen employed Knut Glad from Finnland, who together with his wife Anna, spent there winter 1912-1913. In May 1913, their child was born to Charles Emil Polar Glad, who was probably the first child born in Spitsbergen.

In 1920, these areas and mining equipment were purchased by the Dutch NeSpiCo (Nederlandsche Spitsbergen Compagnie) and then sold to the Russian company Trust Arktikugol in 1932. In 1941, the abandoned, evacuated place, the largest in Svalbard at that time, was bombed by the British fleet so that it would not fall into the hands of the Germans. Germans finally finished the work of destruction. In 1948, the Russians returned and rebuilt the destroyed infrastructure. There was a period of development and population growth of Barentsburg, which lasted until the collapse of the Soviet Union. The population of settlement has been declining since 1990 when it had about 1,500 inhabitants. Currently, about 400 people live in Barentsburg, including only a few children.

In August 1996, an aeroplane Tu-154 M crashed during the approach to Longyearbyen. In the catastrophe, many miners died together with their families – the inhabitants of Barentsburg and Piramiden. It was only a year later that another tragedy occurred: twenty miners got killed in the accident in the mine. Further problems appeared in October 2006 and in April 2008, when two miners were killed in a mine as a result of a fire. To extinguish the burning shafts, seawater was pumped in, which destroyed most of the equipment and caused the mine to be thoroughly renovated. 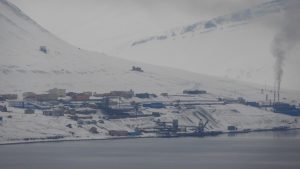