Longyearbyen is the largest settlement on Spitsbergen Island and the capital of Svalbard. It is located in the central part of the island, at the mouth of Longyear river to the Longyear fjord.

The name comes from John Munroe Longyear, an American owner of a mining company, which initiated the first settlement in 1906. 10 years later a Norwegian company, Store Norske Kullkompani (Great Norwegian Coal Company), bought the settlement and has conducted coal extraction ever since. During the Second World War the city was mostly destroyed, an old power plant was one of the few buildings which survived.

After the war the city was rebuilt as a mining town and maintained as such until 1990s. Store Norske was the owner of the city, and they operated all facilities such as the school, medical care or swimming pool as well as shops, housing or a petrol station. It’s worth noting, that until 1980 a special Svalbard currency was used there, instead of Norwegian crowns. In 1993 the Norwegian state took over the city and gradually transformed it into a “normal” civilian town, as compared to a company-run mining settlement. Commercially operated shops and other companies and services were established as well as local democracy and the first hotels were built for tourism.

It was in this time, that scientific activity started in Longyearbyen. In 1993 the University of Svalbard – UNIS was inaugurated. Students and lecturers come to UNIS for shorter stays, typically from one week up to a year. Some of the infrastructure built for the miners was adapted for the new reality – for example worker’s barracks in Nybyen district is currently used as university housing. Later a scientific radar and a satellite station where installed as well as the highly important and renowned seed bank. Currently tourism, education and scientific activities are the most important parts of the city’s functioning. The population is 2200, a great majority of Svalbard’s inhabitants.

Longyearbyen, is a hub for travellers to the Arctic and Svalbard’s many research stations. It is good to know, that the streets in Longyearbyen do not bear names. 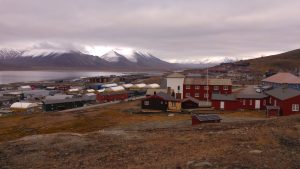 Related resources:
« Previous term: Living fossil
Next term: Mackerel »
Polarpedia has information categorized by main topics. Click on an icon below to view the available terms.