Barnacle geese (Branta leucopsis) are medium-sized birds (55-70 cm length, 1-2,25 kg weight), they occur in three separate populations that breed in northeast Greenland, in Svalbard and in northwest Russia and the Baltic region, wintering in northwestern Europe. Most breed in colonies on small islands. Both sexes look the same: black neck, breast, cap, and bill, white face and belly, black on white plumage on the back.

Their diet consists of leaves, stems, roots, moss and seeds.

Barnacle Geese create closely packed colonies and migrate in flocks of hundreds together. In breeding season 4 – 5 eggs are laid. The female takes care of the eggs for 25 days.

In an effort to avoid predators (like Arctic fox), barnacle geese build their nests on high mountain cliffs.

But just days after the chicks hatch, they face a brutal introduction to the outside world. To find food and join their parents, the goslings must plummet hundreds of feet from their nests. Even though they cannot fly, they’re generally able to survive, thanks to their fluffiness.

During the Middle Ages, the fact that it was never seen to breed, gave rise to a myth that it was in fact spontaneously generated from molluscs – barnacle, that is occasionally washed up on shore attached to pieces of driftwood. Its shell resembles goose head, and is attached to the substrate by a long stalk somewhat resembling a bird’s neck. Thus, the birds were considered “fish” and could be eaten on Fridays. Mollucs (barnacle) thought to give birth to geese in Middle Ages 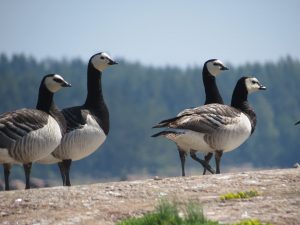