The cryosphere is the part of the Earth system that contains frozen water in some form or another. Frozen water is found on the Earth primarily as sea ice, lake ice, river ice, snow cover, glaciers, ice caps, ice sheets, ice shelves, and frozen ground (which includes permafrost).

The water in each of these sub-systems stays frozen for different amounts of time. Snow cover and freshwater ice are seasonal, meaning it expands and retreats with the seasons. Most sea ice, except for ice in the central Arctic Ocean, lasts only a few years if it is not seasonal.

Ice sheets and ground ice, however, may remain frozen for 10,000 – 100,000 years at a time or even much longer. Ice in parts of East Antarctica may be as old as 1 million years or more.

Antarctica, especially the East Antarctic Ice Sheet, holds 90% of the world’s ice volume. The Northern Hemisphere, on the other hand, has the largest area of snow and ice extent in winter (it takes about 23% of the hemisphere´s surface in winter).

Together, the cryosphere components play an important role in modulating the Earth’s climate system. Snow and ice reflect most of the radiation received from the sun, helping to regulate the planet’s temperature. In addition, the distribution of snow and ice is associated with the temperature differences around the Earth, which drive winds and ocean currents.

Although concentrated in the polar regions, elements of the cryosphere exist at nearly all latitudes, which make them useful indicators of global climate change. Taken together, all land-based ice contains approximately 75% of the Earth’s freshwater. As this ice melts, most of the water produced makes its way to the ocean. This is a subject of scientific studies since the Greenland and Antarctic ice sheets have the potential to raise global sea levels by 7 and 57 meters respectively. 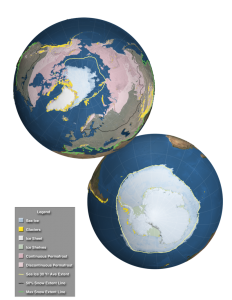 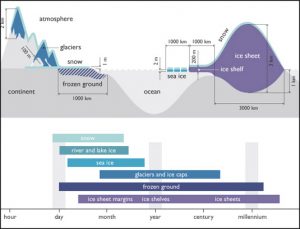 Ice in the Arctic: © NASA 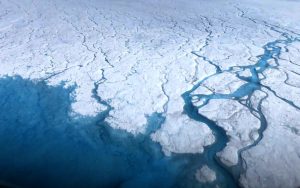 Related resources:
« Previous term: Cryopeg
Next term: Cryoturbation »
Polarpedia has information categorized by main topics. Click on an icon below to view the available terms.