Dispersal describes the movement out of one’s current home range in order to settle permanently somewhere else. Dispersal may lead to gene flow, (that is, the exchange of new genes between areas), if the dispersing individual succeeds in mating with a local individual.

There are many reasons why animals disperse, and it differs among species, genders and individuals of the same species. In brown bears, for example, males probably disperse because of an intrinsic motivation to avoid breeding with close relatives, whereas for the females, social competition among sisters seems to determine who disperse. 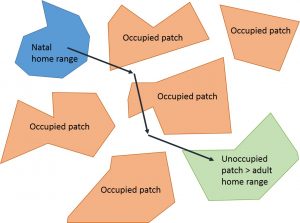 A dispersing individual moves out of the natal home range (blue) to find another suitable area (green). Often it has to pass several areas already occupied by others (orange). Photo: Julia Schregel

Related resources:
« Previous term: Discovery of Greenland
Next term: Diurnal vertical migration »
Polarpedia has information categorized by main topics. Click on an icon below to view the available terms.