Traditional Sami clothing, in the past made from reindeer leather and sinews, nowadays more commonly made from wool, cotton, or silk.

The traditional Sami costume is characterized by a dominant color adorned with contrast colored bands, plaits, embroidery, and often a high collar. Traditional gákti are most commonly in variations of red, blue, green, white, medium-brown tanned leather, or reindeer fur. The main part of the costume consists of a pullover, which is basically the same for men and women, the mens’ version is a bit shorter hangs about mid thigh, while the womens’ hangs to the knee or mid calf, depending on the local variation. Women’s gákti typically consist of a dress, a fringed shawl and boots/shoes made of reindeer fur or leather, beautifully decorated silver jewellery. The boots typically have pointed or curled toes.

Gáktis differ from community to community, for example, in southern parts of Sápmi is longer than the one in the north of the region.

They are worn both in ceremonial contexts and while working, especially when herding reindeer. 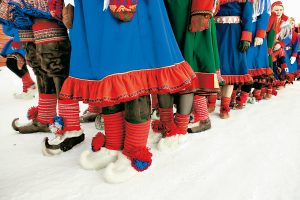