The difference between the amount of accumulation and ablation of a glacier. It can be measured over one year (annual mass balance) or over several years (long-term mass balance).

The most common mass balance measurement is carried out over one hydrologic year.

The beginning and end of the hydrologic year are determined by two consecutive minima: the end of the largest decrease of the surface mass of the glacier, which happens at the end of the period when ablation occurs (summer period).

The position of the glacier’s surface is measured over both the accumulation and ablation periods, which means measurements are taken twice a year, using ablation stakes. 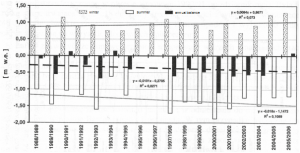 Related resources:
« Previous term: Glacier
Next term: Glacier mill »
Polarpedia has information categorized by main topics. Click on an icon below to view the available terms.