The world’s largest seed bank, the Global Seed Vault, is dedicated to storing edible species of plants. It is situated deep inside a mountain on a remote Island in the Svalbard archipelago, 300 kilometers north of the Arctic Circle. It was opened by the Norwegian Government in February 2008. Storing seeds in the vault is free for all users.

From all across the globe, crates of seeds are sent to the Global Seed Vault for safe and secure long-term storage in cold and dry rock vaults. It is one of the most secured facilities in the world, designed to survive a global catastrophe. It is situated 120 metres inside a sandstone mountain, and is well-protected by robust security systems. Seeds are packaged in special three-ply foil packets and heat sealed to keep moisture out. The fact that the facility is surrounded by permafrost also helps to secure and preserve the samples.

The vault holds the seeds of many tens of thousands of varieties of essential food crops such as beans, wheat and rice. In total, the vault now holds seeds of more than 4000 plant species (it has a capacity to hold 4.5 million samples). These seed samples are duplicates of seed sample stores in national, regional and international gene banks. 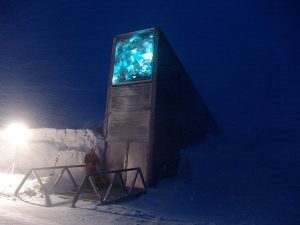 Related resources:
« Previous term: Glaucous gull
Next term: Governor of Svalbard »
Polarpedia has information categorized by main topics. Click on an icon below to view the available terms.