Gyrfalcon (Falco rusticolus) is a formidable predator, the largest falcon in the world (c.a. 0,5 m length, 800 g -2,1 kg weight), it reigns over barren tundra and desolate coasts in the high Arctic, where it chases down ptarmigans in flight or plummets from the sky at breathtaking speeds to strike prey to the ground.

The gyrfalcon is typically found in northern latitudes (up 60N) away from the boreal forest. Although some individuals have been recorded nesting in trees, the majority of individuals of this species nest in the arctic tundra. Nesting habitat is usually among tall cliffs while the hunting and foraging areas are more diverse.

Lately gyrfalcons have been discovered to be ‘secret seabirds’ – it turns out they spend much time on sea, living and hunting on pack ice. The birds likely rest on the ice and hunt other seabirds such as gulls and guillemots, over what appears to be one of the largest winter ranges yet documented for any raptor.

Gyrfalcons have pointed wings, the tail is relatively long. The body is thick and powerful, particularly in females, which are substantially larger than males. They have a variety of plumage colors that range from a dappled white to almost pure black.

Gyrfalcons do not built their own nests but use those built by other large birds, like ravens and golden eagles. Gyrfalcons first breed at the age of two years [Potapov & Sale 2005]. Clutch size is normally 3 or 4 eggs. Incubation time is 34-36 days. As with most raptors, the female incubates more than the male which is responsible for bringing food to the nest.
After hatching, the young stay in the nest for another c.a. 50 days.  After leaving the nest, the young are dependent on their parents. They develop their hunting skills  slowly and for the first 6 weeks, they rely mostly on food brought to them by their parents [Potapov & Sale 2005].

The current population in Europe is estimated at 1500 pairs. 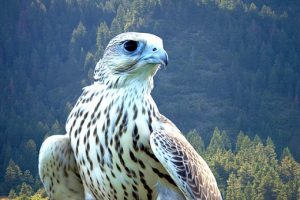 « Previous term: Gyre
Next term: Habitat »
Polarpedia has information categorized by main topics. Click on an icon below to view the available terms.