There are 5 gyres around the globe:

The direction on rotation depends on hemisphere (clockwise in Northern hemisphere, counterclockwise in southern hemisphere).
Gyres have a tendency to draw the pollution released in coastal areas to the ocean. As a result, so called Garbage Patches are formed – mostly made up of the microbeads and plastic fibers. 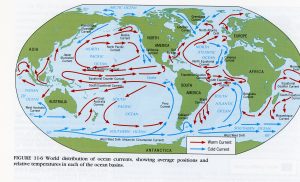 Related resources:
« Previous term: Gumpi
Next term: Gyrfalcon »
Polarpedia has information categorized by main topics. Click on an icon below to view the available terms.