Climate interval that occurred from the early 14th century through the mid-19th century; the average temperature in the northern hemisphere dropped by just 0.5°C. Advancing glaciers in mountain valleys destroyed European towns. Paintings from the 1600s depict people ice-skating on the Thames River in London and on canals in the Netherlands, places that were ice-free before and after the Little Ice Age.

Scholar disagree about the actual scale and impact of this change. For example, a soldier wrote in his diary while traveling through Germany in 1640 (in August) – At this time there was such a great cold that we almost froze to death in our quarters, and on the road, three people did freeze to death: a cavalry-man, a woman, and a boy. Early studies attributed the European LIA cooling to periods of low solar activity. Later studies suggested a more important role of strong volcanic eruptions in the onset of the LIA, through amplifying internal climate feedbacks, involving a reduced Atlantic meridional overturning circulation (AMOC), and/or a varying phase of the North Atlantic Oscillation (NAO).

Many historical impacts and societal are attributed to Little Ice Age, such as: great famine, black death, 30-year war, midwestern population explosion or even invention of the Bicycle (because people were not able to feed horses with scarce crops). 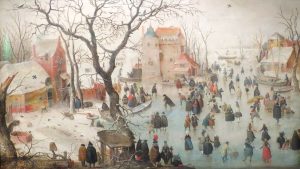 « Previous term: Little auk: description, reproduction and individual development
Next term: Living fossil »
Polarpedia has information categorized by main topics. Click on an icon below to view the available terms.