During the Arctic in winter (polar night), the stratosphere – in addition to its air mass not being able to mix vertically – can become caught in a vortex, which will prevent the air in the stratosphere from mixing with neighbouring air masses. This results in the creation of a vortex, called the Arctic polar vortex.

The figure caption a polar vortex observed on January 6, 2011 over the Arctic at an altitude of about 23 km. The air masses close to its exterior circulate at nearly 200 km / h and can cross the Earth in only 3 – 4 days. 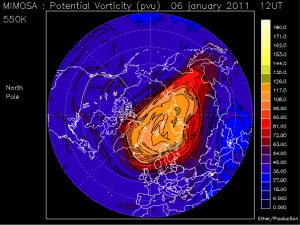