The puffin (Fratercula arctica) is one of the most easily recognised birds. It has a comical appearance, with its parrot-like, large colourful bill, red and black markings around the eyes  large pale cheek patches and bright orange legs . Young puffins lack the large colourful beak. In winter, adults lose their bright bill, and both adults and young have dark cheeks. A deep ‘arrr-uh‘ noise is produced, which can be heard emanating from puffin burrows.

Puffins occur in and around the North Atlantic. In winter the puffin disperses over the open ocean reaching as far south as the Azores and Canary Islands . Over half of the world´s population of the Atlantic Puffin breeds in Iceland, somewhere between 3 – 4 million pairs each year. The total population of puffins in Iceland is estimated to be between 8 and 10 million birds.

Puffins spend most of their lives on the water, coming ashore only to breed and raise their single puffling (chick) each year. Along with the other alcids (auks), puffins swim well underwater using their flapping wings to propel them under the surface and their webbed feet to manoeuvre. Their bodies, similar in shape to the flightless penguins, are wonderful for diving and swimming but clumsy in the air. Puffins can dive to depths of about 60 metres. Puffins eat small fish—such as sand eels and herring—which they hunt underwater. Puffins can carry several fish back to their nest at a time.  The average catch is around 10 fish per trip but the record is more than 60 fish at once!  The puffin’s beak is specialized to hold all these fish.  The puffin’s raspy tongue holds fish against spines on the palate, while it opens its beak to catch more fish.

In the spring and summer, thousands of puffins gather in colonies on the coasts and islands of the North Atlantic Ocean. Pairs of puffins often become mates for life, finding each other at their breeding colony year after year. Puffins lay 1 egg per year.  They usually keep the same mate every season and use the same burrow as in previous years.  The male and female share the duties of incubating the egg and rearing the chick.

In northern legends, puffins are thought to be incarnation of sailors dead at sea. 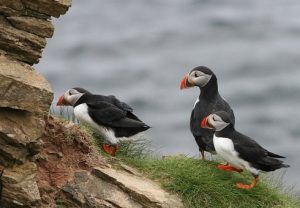 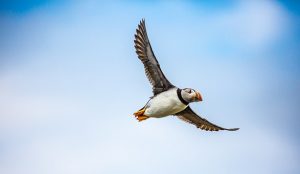 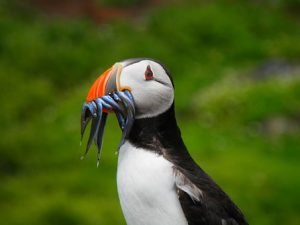 Related resources:
« Previous term: Psychrophiles
Next term: Qajaq »
Polarpedia has information categorized by main topics. Click on an icon below to view the available terms.